What Temple Grandin May (not) Say About Museum Exhibitions

Last night I attended a lecture here in Boulder by Temple Grandin. Dr. Grandin was made popularly famous by the HBO movie featuring her life and work as an exceptional and autistic designer of humane beef slaughter plant systems. In fact, she’s the only person to receive an award from PETA and an inductee in the Meat Industry Hall of Fame. In 2010 Time Magazine named her as one of the 100 most influential people in the world. 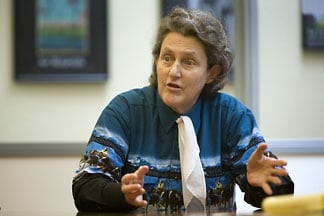 Her lecture was primarily focused on her thinking about autism and other spectrum brain disorders, although, refreshingly, there’s no separating her life’s calling in animal welfare from her views on human disabilities. She’s an entertaining and clear presenter – making concrete connections between seemingly disparate subjects in a most honest and real way. “The Spectrum”, as many call it, include a wide range of diagnosed brain developmental disorders that include autism, Asperger’s, ADHD, and other social and stimuli-related conditions. For simplicity, I’m referring to these collectively as “spectrum”.

Dr. Grandin talked extensively about how learning, social engagement and brain wiring are all interconnected. And while her presentation was not focused on museums, exhibitions or anything related to the design of public informal learning environments, Dr. Grandin’s words spoke strongly to the design of exhibitions.

From her comments, I drew several directly relevant concepts that may well inform the design of exhibits in ways that address a broader range of brain functions, and perhaps inadvertently propel quality engagement for both “normal” and “abnormal” functioning visitors.

I’ll explore two of the presentation themes within the context of the museum:

Dr. Grandin stated that spectrum learners move from the specific to the general. Meaning, that while most individuals understand a broad concept and then find examples that fit within that big picture idea, a spectrum thinker may only understand broad concepts through the collection of individual examples. For instance, I may think of church steeples as a single architectural expression, and draw connections between steeples, towers, monuments and spires, a spectrum thinker may only understand the steeple near their house, the one the drove past in 1982, the drawing of one in a Rembrandt, and on. This is without placing them in a group context.

Civil War museum object display – While the artifacts may well be conceptually connected, the collection does not provide any cues as to how they are related beyond a possible text label. They remain a group of lone, disparate items to particular visitors.

What does this mean for informal learning environments and their development? I’ve often stated in the design process that we move from the general to the specific. This is both in terms of how exhibits are crafted, and also how a visitor may engage with the content. More or less, using a hierarchy much like a Linnaeus-inspired cataloging of the world. But what if the exhibit experience were built upside-down? Or, what if aspects of an exhibit builds intellectual connections between specifics directly. By way of example, a designer may place a group of artifacts together that all relate to a period of time, trying build a “portrait” through the objects of how these things may have been used together or how they all relate to a particular person or historic moment. Imagine a case of military artifacts from a particular Civil War battle – munitions, buttons, belt buckles, canteens, photographs, and on. Yet, the connection between them is purely inferred and not built on what the actual objects are. The message is entirely dependent on the intellectualizing of the meaning – building the connective threads out of the ether, not real sinew.

Developing an exhibition, particularly an artifact-based one, with a bottom-up learner in mind may require using the objects in contextual format that is supported by visual example of its use or utility. Allowing for richer development of the particular qualities of an individual object may be far more effective as a building block than a wide range of objects serving as representation.

Visitor Control of Stimuli
Exhibits are noisy, unpredictable and difficult to navigate. Designers use “conceal and reveal” techniques to engage the visitor with the idea that “aha” moments and learning occurs when the unexpected come together like fusion. Yet, we also know that visitor comfort, self determination and expectations provide the window for engagement. Dr. Grandin spoke of how spectrum learners will often find dramatic sensory overload in what many dismiss at the ordinary conditions of life. This is particularly triggered by light, sound and motion that is out of the control of spectrum visitors.

Exhibit designers are constantly challenged, even encouraged, to squeeze yet another interactive, audio program or display into limited square footage. Sound bleed is abated with specifically engineered speakers that attempt to control audio into focused areas – usually only half as effectively as when demoed at the vendor’s booth in a museum conference exhibit hall. Visitor flow is designed to limit views and surprise. All this leads to the kind of sensory noise that is only partially understood by the exhibit development team. 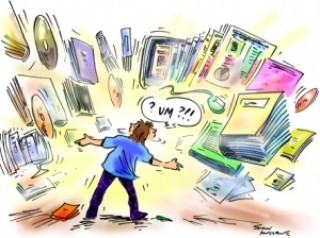 Stimuli overload in the museum may not just turn off the public, and its ability to engage, but could be even more harmful to mentally disabled visitors.

Dr. Grandin stated that often times the same stimuli that can drive a spectrum visitor into literal convulsions may be effectively dealt with by allowing the individual the control to activate/deactivate the stimuli. This self-directed engagement creates a relationship between the viewer and the stimuli that works to desensitize rather than trigger negative reaction. For example, a video that may be designed to run on a loop or triggered by a motion sensor may better be designed with a push button. Some small design changes can create a more welcoming environment without significant impact to the overall experience. In fact, the overall experience may well prove beneficial for all visitors.

In all Dr. Grandin’s perspective on learning and engagement styles present a different lens that may simultaneously create more access to the museum of a particular portion of our population. Through this, exhibitions may become stronger overall and increase the the general public’s connection as well. At least, a greater awareness in creating exhibitions with better access can help frame the creative process and intent in our work.