Van Gogh — Scraping Together an Education

I had the opportunity to view the Denver Art Museum Becoming Van Gogh exhibit early this week (now sold out until the end of the exhibition on the 20th of January). The exhibition is a broadly sourced focus on the artist’s 10 year creative journey. In short, he began his serious art endeavors around 27 and continued until his death in 1890. The exhibit’s curators focused on his artistic development to the near complete lack of attention on his troubled life, ears and cause of death. I applaud that. 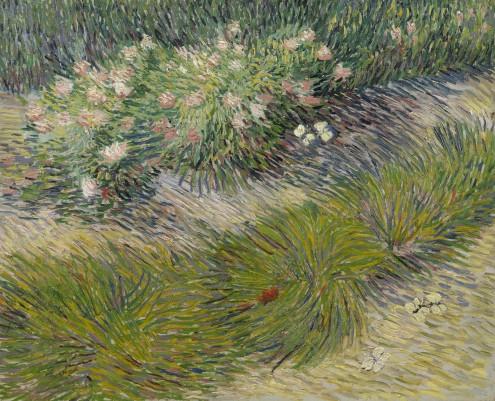 Van Gogh was not what you’d call a “self taught” artist, but rather an artist desperate to learn through any and all means possible. He plowed through instruction manuals, “how-to” books, community classes and hanging out where the artists hung. By the time of his death had had little following, but was respected by the artist community, in spite of his sloppy education.

DAM’s curators expressed this well, primarily through a “layered” audio tour. Two sets of numbers on the wall indicated if the audio stop was “adult” focused or “family” focused. I attended the exhibit with three kids who frankly didn’t care which level they were listening to. The adult tracks were more focused on his education and gathering of techniques. The family tracks were more focused on learning observation, both of Van Gogh himself and the viewer’s observations of the exhibit. I listened to all of them too, but agreed with the elementary-age critiques that other than tone and length, the content was appealing across the ages. Tracks were appropriately long, loaded with music and folly effects, which deepened the content, and naturally professionally recorded with skilled voice artists.

Four “interpretive” locations were spread throughout the gallery. They focused on topics such as Van Gogh’s use of perspective frames, and ways of experimenting with color. The locations were positioned mostly adjacent to paintings that expressed the concepts being explored. They most compelling was the color stop. At it, there were several balls of mixed-color yarns in a case. The audio and panels presented Van Gogh’s frugal means of experimenting with color by laying strands of different yarns together. A nearby painting of clumps of grass nearly perfectly expressed the its colors through strands of multi-pigmented paint strokes. However, the curators missed a wonderful opportunity to implement a tactile and hands-on interactive with yarn. I for one, desperately wanted to grab the yarn from the case and play with it and experience the creative process of the exhibit’s subject. Many ways could have been crafted to keep the yarn from walking away and secured to the location. Also, rather than rely entirely on the audio and panels, a small bundle of yarn directly besides the grass painting could have reinforced the connection and offered it in different learning style and made an interpretive message immediately accessible without requiring a purely cognitive connection.

The first floor hands-on painting studio (which rocked, by the way) could have taken the four interpretive stations and had them come to life in ways that the exhibit itself didn’t. I’d like to see the museum build even stronger connections between the “play spaces” and curatorial content.

Small misses in otherwise strong exhibits are easy to find when Monday-morning quarterbacking, for sure. Still, even with temporary shows we should work to keep the curatorial and design process alive during the course of the exhibitions. We make endless changes to exhibits up to the point of opening and then too often walk away “sealing” the exhibit as final rather than continuing to add, adjust, refine and refresh.

Overall, as a savvy museum-goer, I found tremendous joy and meaning in this exhibition. I hope the others who had the opportunity to see it also found it as compelling – beyond simply seeing a blockbuster in the art world.