Studio Tectonic is currently planning and designing the Peace Museum in Sierra Leone which communicates the story of its brutal civil war. On a recent planning trip, I worked with the museum team to help develop the master plan for the museum which will open in phases – starting in late 2013.  Part of the site visit was a field trip into remote places in the country to meet with the community task forces that are actively collecting objects that were used during the war. 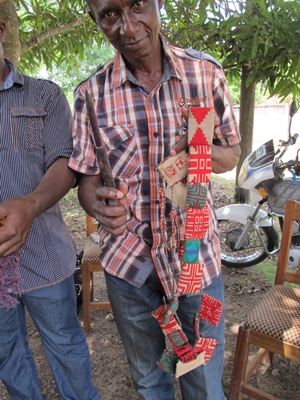 Many of these objects are owned by families and even combatants. The artifacts range significantly and many were used for murder, spiritual battlefield protection and torture. Frankly, they possess the qualities and power that nearly make simply exhibiting them at all all that’s needed. Objects of unspeakable, and even unimaginable pasts, have that power. Holding them in my hands left my head spinning, and it still is.

In contrast, many exhibits that I develop struggle to find the objects to tell its stories. Photos are elusive. Objects of the period are non-existent. Instead, we develop media, experiences, animations, testimonials exhibit copy to support and surround artifacts that don’t exist (either never existed or can’t be found). I think back to an exhibit about a Native American leader who was never photographed and left no known objects attributable to himself. The exhibit team struggled with how to make a rich visitor experience with a lack of materials. We surrounded the story in the way that group process is sometimes taught in school – a group of people blindfolded, all circling an elephant and each describing the parts they can grasp in the hopes of defining the whole through piecemeal observation. It works, but it’s work.

So, here’s our Sierra Leone team facing a near opposite challenge – holding back some of the potency of these war objects in order to build an exhibit experience that doesn’t simply overwhelm visitors or worse, become a sideshow of objects of terror.

Here’s the funny thing. During my meetings with the collecting task forces and reviewing the materials, I sat in the state of near paralysis from the imbued history in these things. Meanwhile, my in-country colleagues held and spoke of them in such casual and familiar ways. I consider the differences between the local and foreign viewer. I think about the audience and how these will be perceived differently by those who lived through the war and those who didn’t. I think about duration of one’s exposure and how that affects perception.

I have no profound discoveries to share, but rather an examination of the thought process spurred by being responsible to use such potent objects within the exhibition context.

I share a few photos of clothing and adornment for your own consideration. 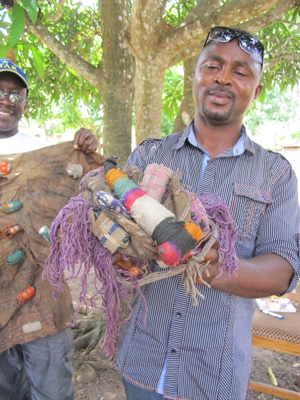 Hat with yarn wig, likely to obscure wearer from recognition and intimidate victims 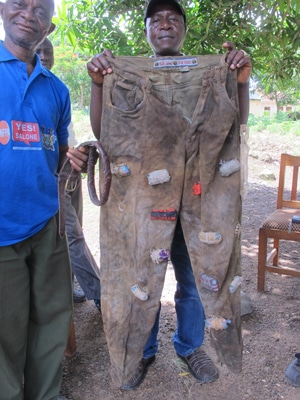