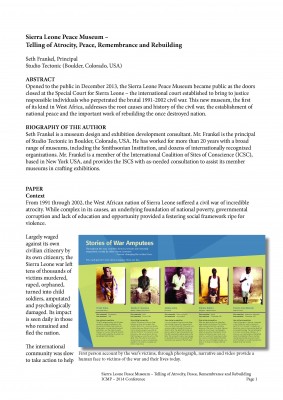 Seth Frankel presented on the creation and opening of the Sierra Leone Peace Museum at the 8th INMP conference – this year in South Korea. The conference occurs every three years at a different international location. Approximately 200 participants gathered at the NoGunRi Memorial near Gimcheon, in south central Korea. NoGunRi is the location of a peace museum centered around the massacre site of nearly 300 civilian Koreans by American soldiers at the early days of the Korean War. The massacre was denied by both the US and Korean government and only acknowledged in 1999 thanks to the decades of pressure by one of the Korean survivors.