Tips on Use of a Multiple Languages in Exhibits

Wide ranging cultural institutions often wrestle with when and how to use multiple languages in their exhibitions. As well they should. Any institution, except for those in the most homogenous areas, need to be asking how their use of language embraces, pushes away or ignores visitor needs. This is also not a static analysis but rather important to understanding audience engagement with each new and aging exhibit. 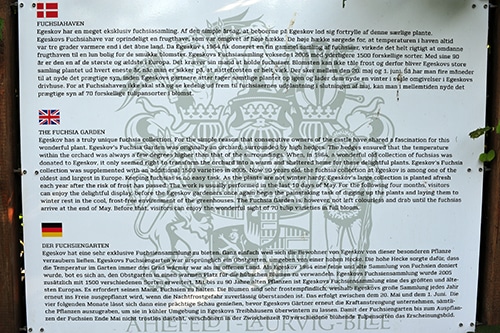 An interpretive sign in Denmark includes three languages in dense copy and becomes a vast Baltic Sea of type.

In some regions, such as Montreal, choice isn’t an option but rather dictated by law (English and French). In other areas and institutions there aren’t governing rules, but rather exhibit language is a matter of common practice. However, most institutions are left somewhere in-between without a hard and fast policy or even obvious direction on the use of additional languages.

Through our work with institutions around the world, we’ve advised that issues around language be considered at the early conceptual phase of planning an new exhibit. Sometimes there’s a bit of pushback…that the subject really isn’t important until writing copy and designing panels and media components or that their just isn’t a need to examine that part of visitor communication. We find, though, that by including language discussions early on, the exploration of audience needs is brought upfront through these discussions. We all want our exhibits to be inclusive and approachable by our audiences, but we struggle with this hard-to-wrestle issue. It’s frankly hard work, burdensome and uncomfortable to consider language only to conclude that our past approaches may not work. Then there are the practice considerations – available space, time, cost. 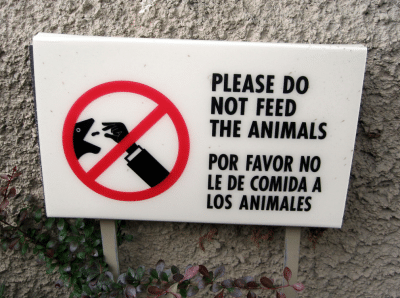 A Do Not Feed sign at a southern California zoo

So, if early discussions lead to the conclusion that using multiple languages, in some form, is warranted and helps us meet institutional goals then what’s next? There are many paths and degrees/methods of implementing this approach.

A worst-case example makes its way around most planning conversations: only including a secondary language for the DO NOT TOUCH, and other regulatory and restroom/exit signs. In short, a not-so-subtle statement that foreign language speakers are a museum risk factor or that the educational content doesn’t pertain to them.

Of course, the extreme other direction doesn’t particularly lend for a quality experience and is bound to disappoint those whose language isn’t featured. Panel layouts easily become text heavy and frankly ugly. Words overtake graphics and the natural flow around exhibit materials becomes jolting and poorly functioning. What we gain in trying to serve a broad audience ends up barely serving any of them. Still in some situations, a fully translated panel may still be the best solution.

Options for Including Multiple Languages

For exhibits that do see audience value in using multiple languages there are generally three approaches:

Supplemental multi-language handouts that translate material (either partially for fully).

of multiple languages on signage for key messages, or a summary story statement related directly to the visuals on the panel. 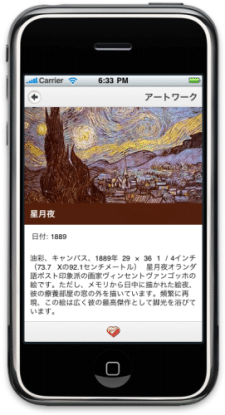 Even within a single city or institution, there may be several “right” approaches and perhaps even more wrong ones. When shifting to a multi-language model no one approach is perfect (but taking no approach may be the worst strategy). Museum visitorship also changes over time and some of these approaches allow for easier retrofitting of existing exhibits. All exhibit planning processes, though, should allow for our predilection or unexplored assumptions of language to be challenged.

Still, the written word is only one aspect of reaching out to a diverse audience, albeit an important one. Does the exhibit’s content engage our audiences and give them reason to come back or visit in the first place? Do the marketing and event strategies welcome cross-cultural communities? Shifting an institution’s overall communication approach isn’t a one-time effort. Frankly, it’s unrealistic to envision such sweeping changes happening deftly.

The exploration and appropriate implementation of multiple languages in exhibits is a critical and important factor in good exhibit planning and institutional self-examination.