Boulder Pops?… Exhibiting for a Day 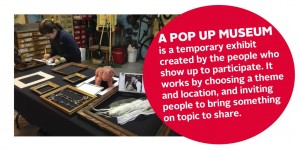 One current museum trend actually has nothing to do with a museum- or the walls of a museum at least. More and more frequently, designers, artists, pedestrians even- are committing guerilla museum exhibit design at impromptu to Pop-Up locations all around their cities. Pop –Up Museum is “a temporary exhibit created by the people who show up to participate” and usually only lasts for a few hours.

The fun and quirky nature of this spontaneous street-side museum opening often yields a glimpse towards meaningful objects that fall within a main theme that have been put on display and interpreted by members of the community.

Do you have something that has its own fascinating history and you’ve been waiting for that perfect moment or cocktail party to tell all your friends about it? Maybe some secret bottle collection reflective of Boulder’s prohibition times, historical horseshoe, or Native American frontier era feather? Or Boulder’s oldest Yoga mat? Everyone has a story.

The Boulder Parks and Recreation Department recently committed a successful act of guerilla exhibitry with the city’s first “Parklet”- a park spanning the width of two parking spaces, made of decking and doors, centered around the theme “What do you a-door about Boulder?”. The parklet is a great example of a Pop-Up Museum waiting to flourish. Whether displaying comments or artifacts, the chance to share one’s own story never fails to entice. Would you be interested in participating in a Pop-Up Museum? Maybe we can provide that opportunity to share the story of your that historical yoga mat in the bottom of the basement. 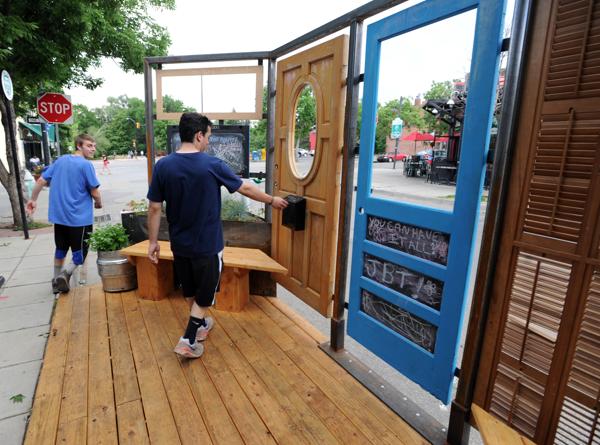 Here is a guide to “Pop-Up” Museums that was published by the Santa Cruz Museum of Art and History. Why do museums have to be behind walls anyway? Be on the look out for a Pop-Up Museum near you!